Thomas Sanders is the main character and 'combination' of the Sanders Sides. It is also the name of the YouTube channel and creator of the series. This article focuses on the character Thomas, not the creator Thomas. His currently known Sides, or aspects of his personality, are Logan, Patton, Roman, Virgil, Janus, and Remus.

Thomas is a Caucasian man in his early 30's. He has brown hair and eyes, although from Fitting In (Hogwarts Houses!) to EMBARRASSING PHASES: The Nightmare Instead of Christmas! his hair was dyed purple. Unlike his Sides, he is not limited to one "main" outfit, instead wearing a new outfit in each episode.

When Thomas is facing a personal dilemma, he has the ability to talk it out with several personified facets of his personality. These aspects of his personality are metaphorical representations of his inner thoughts. To an outsider, this looks like him talking to himself for an extended period of time.

The Sides have direct influence over Thomas' mental and emotional state. As a result when Virgil ducked out in ACCEPTING ANXIETY, Part 1/2: Excepting Anxiety! Thomas couldn't feel anxious. Other examples of this are in MOVING ON, Part 2/2: Dealing With a Breakup when Logan is not present, but it seems like he is speaking through Thomas.

The standard space for videos is Thomas' living room. In ACCEPTING ANXIETY, Part 2/2: Can Anxiety Be Good?, Logan explains that his location in the real world directly influences how the Sides' rooms in the mind palace look. As Thomas is not imaginary, however, he has his own physical space to live in.

Thomas also has a room in the mind palace created in Growing Up by Roman, although it hasn't been used since Making Some Changes! due to the change in location being too overwhelming for him. This is because he isn't a Side, but rather their whole.

All of Thomas' relationships with his Sides are based on their interactions, as the Sides are a part of Thomas and technically all himself. However, Thomas seems to get along with most of his Sides. He has a negative relationship with Remus, and a somewhat neutral one with Janus.

Logan has been recognized as the source of exposition in most videos because the other characters are too zany or relatable. Thomas seems to value Logan as an important part of himself, and Logan himself has learned to understand Thomas' emotions better, as we see him constantly comforting Thomas in the episode Working THROUGH Intrusive Thoughts. However Thomas does not usually go to Logan as the first say in a decision, and is likely to choose another choice over Logan's.

As Thomas' emotional side, as well as embodying his appreciation for puns and dad jokes, Patton doesn't waste any opportunity to be supportive and affectionate towards Thomas. Their relationship is very amicable, Patton having strong paternal feelings about Thomas.

Due to the existence of the Dark Sides and the traits they represent, Patton often worries whether or not Thomas is a good person, to the latter's distress. When Thomas admits that something Patton does makes him uncomfortable or doesn't help him, Patton tries his best to concede, though he can't promise he'll always have the perfect answer for everything.

Roman is recognized as the source of ideas in the videos. Many videos center around a lack of ideas, causing Roman to feel self-conscious. He has admitted on several occasions that he doesn't want to let Thomas down by providing inadequate ideas. Ever since Selfishness V. Selflessness Redux, Roman seems to be resentful towards Thomas because of Thomas agreeing to give Janus a seat at the discussion table, responding with I thought I was your hero...

This resentment seems to carry on into the Asides Episode Flirting with Social Anxiety, with Roman constantly calling Thomas a liar in the beginning. However, they seem to be on okay terms near the end as Thomas, Roman, and Virgil all freaking out over Nico

When Virgil was first introduced, Thomas viewed him as a bane that he had to get rid of. Taking on ANXIETY with Lilly Singh!! is an entire video dedicated to ways to curb anxiety. Early on, Thomas and the other Sides pigeonholed Virgil into the role of the antagonist, which he tried to embrace in order to fulfill his role and make them listen to his contributions. His decision to 'quit' as Thomas' anxiety caused Thomas to lose any sense of survival instinct, which is what made him and the Sides finally realize that Virgil was more important than they gave him credit for. Since then, Thomas has accepted Virgil and made a conscious effort to listen to him and make him feel like a valued member of the group.

At the end of Dealing with INTRUSIVE THOUGHTS, Virgil willingly tells Thomas that he used to be a Dark Side. He responds with a look of shock and disappointment, but Virgil leaves before he can say anything about the matter. It's unknown what effect this revelation will have on their relationship, but they seem to remain on good terms, as Virgil helped Thomas pursue his crush.

Thomas was shaken upon meeting Janus and struggled with accepting him as a part of himself. Thomas has called Janus a slimy snakey boi and previously seemed genuinely terrified of the 'Dark Side' and what he represents; the idea that he wasn't the perfectly honest person he wanted to be. In Can LYING Be Good??, Janus impersonated Patton for most of the episode, and upon being discovered, claimed that he was Patton all along. While the obvious lie was debunked seconds later, it significantly distressed Thomas.

After Janus' intervention in Putting Others First - Selfishness v. Selflessness Redux, Thomas realized that Janus' existence did not mean that he was a bad person, but simply that he wasn’t perfect. Janus' valuable insight in the same episode also showed Thomas that listening to him and accepting this part of himself was just as important as listening to and accepting any other Side.

Thomas was terrified with Remus at first but soon it turned to annoyance. Similar to how he reacted to first seeing Janus, he was frightened upon the Side's arrival (Can somebody tell me who he is?!). He learns to dismiss all of Remus' contributions near the end of Dealing With Intrusive Thoughts, and Thomas doesn't interact with Remus at all in Working THROUGH Intrusive Thoughts. 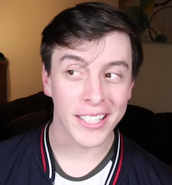 Thomas' look in season one. 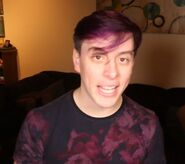 Thomas in Selfishness vs Selflessness